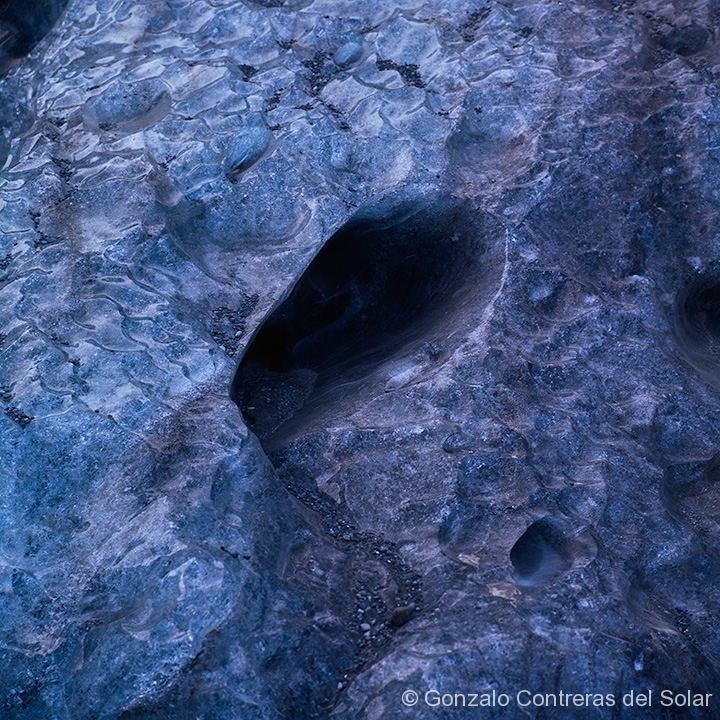 These is an image of another Shrinking glacier.

I  witnessed the disappearance in a period of less than 25 years of an entire glacier at a Bolivian mountain range (image 0176-10 presented some weeks ago). Wanted to repeat the cave images, so I traveled in 2016  to Iceland.

Looking at the terrain, I can strongly affirm that Global Warming is real. Felt dismal when I found out that the glaciers in this latitude were having a similar fate. The average glacier retreat at Breiðamerkurjökull during the last decades went from 30-50 meters per year.

From a 2012 satellite image, the glacier tongue retreated in more than 790 meters in a period of 4 years. It is definitely a much larger average per year, which clearly predicts a not so auspicious future.
Glaciers holes are produced by various factors: internal rivers constantly bathing the ice and fallen mossy stones from nearby mountains. The stone absorbs heat, ice around it melts, making holes like the one on the center of this image.

As the glacier advances, some ice blocks change position and you can find horizontal holes instead of vertical. In the image you see a large number of small pebbles carried by the wind, increasing the ice melting.
Sadly, as with the glacier retreat, this was one of the last images my Rollei 6006 camera made of the Shrinking glacier. She accompanied me for more that 33 years, but due to the cold weather, blocking the mirror lift.  As  the motor advanced, it destroyed the entire pulley mechanism, so the camera said goodbye for good.