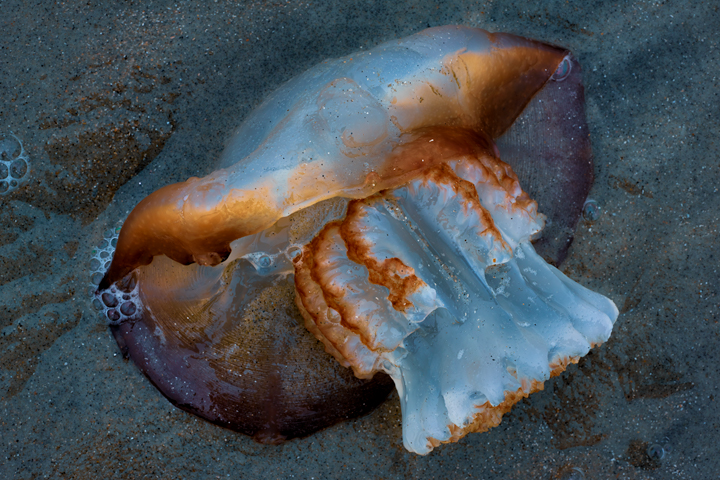 These images of the jellyfish were taken at Hilton Head Island on a cold windy early spring afternoon.

Traveling with my wife and based on a condo rental options we had, the tickets went to Hilton Head Island.

Although the island is in South Carolina, we took two different airplanes to a Georgia airport that was closer. The second was a small airplane and due to the weather, we had a rough flight. I think we were about one hour drive from the airport to Hilton Head Island.

Approaching to the island, all the highway propaganda signs started to disappear, as there was a regulation the prohibited them. We had some difficulty finding the resort, but we finally made it.

There was a golf tournament, so most restaurants and locations were full. To visit the Harbour Town Light House, we had to park far away and take a bus.

The weather was still bad, and after lunch went to walk to the beach adjacent to the resort.

It was windy and had to protect my camera of the thin flying sand. On my way back found these jellyfish laying on the sand. The colors we strong due to the even light produced by the high clouds. The images once converted from RAW to PSD, did not come out as I saw them. Only this week after redeveloping with the latest Adobe Camera RAW version as well as NIK Collection. I was curious about the jellyfish laying out on the beach at Hilton Head Island.