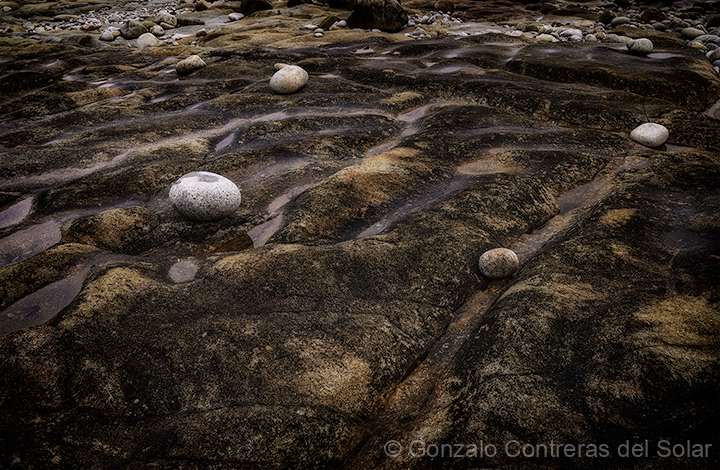 This is the story on how I found polished rocks at Puerto Ranquil.

During our visit to Valdivia, we wanted to visit the seashore of Corral, which we visited 38 year earlier.

At that it, you could only take a tourist ferry that took you to the Corral and Niebla Spaniard fortresses, both guarding from key positions at each side of the Corral bay.

Google maps showed me that there was now a road to get to Corral. My intension was to take images of the rocks of the Pacific Ocean seashore.

We drove 1/3 of  distance when the paved road ended, nevertheless the gravel road was not that bad.

At about one half of the distance, we got to a very long bridge, however it was on maintenance for the next 4 hours. The online travel maps had mention about this, or very few people drove by to register this inconvenience.

At the hotel I learned that you could take the car ferry from Niebla to Corral in about 40 minutes.

The following day we took the ferry that balance heavily due to the Corral Bay sea waves.

Driving through a costal road adjacent to the Pacific Ocean, I could not find a public entrance towards the seashore. The entire coast had a private fenced terrain, and the very few open places were not interesting

After a long drive we discovered a small dirt road in direction towards the sea. However, from time to time the road made a curve taking you away from the sea. Finally, we found a small parking area, as we stopped, a trail towards the sea became visible.

White polished rocks with form of an egg were scattered that caught my attention and started registering them.

I discovered that there was a large flat rock formation, where smaller rock rolled during high tide. As the rocks rolled, they were polished making groves as well on this flat formation.

Although I focused on taking images of the creek, the polished rocks at Puerto Ranquil are something special.