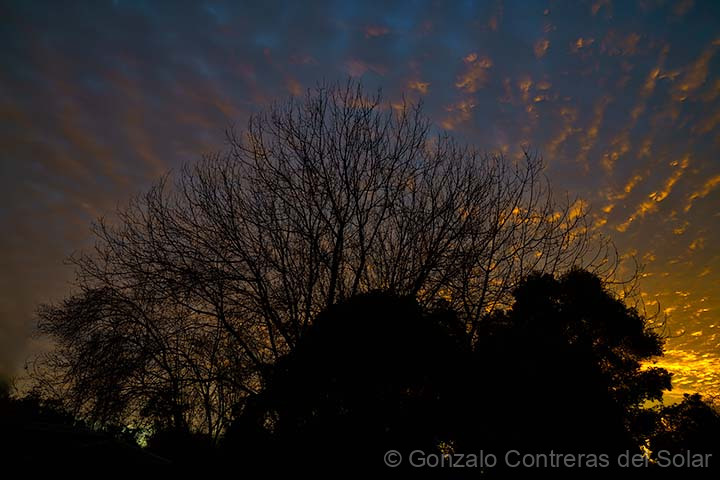 The climate change has brought a great drought, these are image of water clouds that returned for a moment.

For some time, we hadn’t seen clouds other than air pollution or gloomy days due to fog.

The zone where I live has the benefit of early morning fog, that brings humidity to the zone.

Although we had a few cloudy days, this year as well as previous, had very little rain, clouds just passed.

For a week the meteorology report gave a 5 day rain, however, every day it was postponed. Also, it was announced that the rain would come with strong winds, which fortunately did not happen. When rain finally arrived, it was light gentle and persistent, so we had no power outage.

The second day of rain had a beautiful sunset, with an orange – purple color, but I was on a meeting.

The rain had cleared the smog and the sky was transparent. Still some cloud as the sunset was to arrive when I noticed that the white branches of tree were glowing. Rushed to take my camera and tripod, but after placing the equipment, the light turned dull. Went to get my jacket as the it was very cold and waited for the light conditions to change.

Soon after, the sun painted the white branches again, I made few color images, however B&W expresses what I visualized.

I am also presenting a second image with the dull sky, but with a digitally painted purple colored view. The last horizontal image has the true colors of the water clouds that returned for a moment.